You are here: Home1 / Tree works during Covid-192 / Arboriculture3 / The urban forest: our most sustainable wood fuel resource?
back to POSTS

Some thoughts on our city’s green infrastructure and its use as a fuel source.

The benefits of our urban trees are well documented, we know for example that they aid heat amelioration, improve air and water quality and improve urban drainage helping to prevent flooding.  They are also responsible for improving our health and well-being; encouraging people to spend more time outdoors improves physical fitness and studies show beneficial impacts on cognitive function. Trees raise house prices too: estimates vary between 5% and 30% increase in value for houses in leafy areas compared with those where trees are absent.  They also harbour urban wildlife, which again has a positive impact on our wellbeing.

What we don’t seem to do is consider our urban green space as a sustainable fuel resource. Yet huge quantities of our urban trees are felled every year, with the vast majority of this timber finding its way into the firewood market. So why don’t we notice this denuding of our green spaces? Well, it seems we plant an awful lot too, its hard to find figures but its pretty safe to say that we must be planting trees at pretty high rates too. Garden centres sell huge quantities of trees, shrubs and hedging every year, and these are the potential problem trees of the future, ready and waiting to be recycled as sustainable firewood….. While Mrs MacDonald at no 57 was having her overgrown tree removed Mrs Jones at No.28 has been to the garden centre and bought 3 poplar trees… The public sector plant a lot of trees too, we have planted around 500 amenity trees in parks and on streets in the last year for local authorities, and thats just a drop in the ocean overall. With the benefits of green infrastructure being well recognised planners are keen to ensure that any new projects incorporate an element of green space, and trees are usually involved. Most large infrastructure projects have a significant element of tree planting involved, and in some cases new urban forests are being created. Its easy to see a bright future for our urban green spaces.

So just how green are our cities? Take a look at satellite imagery of Edinburgh, there’s definitely more green than grey, or if you live in Edinburgh just climb one of the city’s many hills, heres a view looking north from Blackford hill: 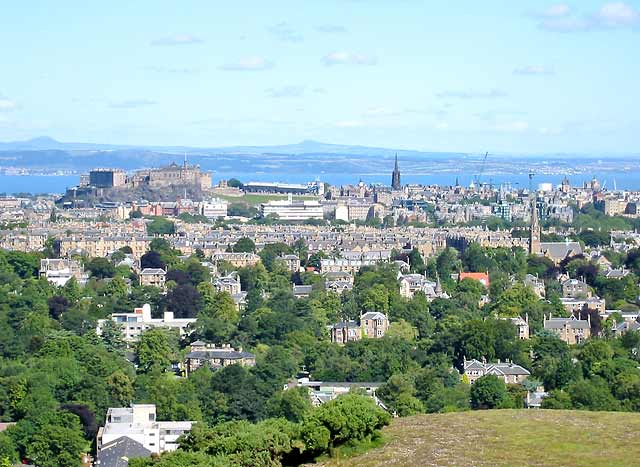 So what about cutting them down and burning them? well clearly it wouldn’t be good if we cut them all down, but if managed sustainably surely our urban forests are a resource not to be overlooked in our push away from fossil fuel energy? Which begs the question; are we managing our urban forests sustainably? I would say that in my experience of Scottish towns and cities that we are. In 18 years of working in arboriculture I have not seen any noticeable change in the numbers of trees or the levels of green space in Central Scotland, The Lothians, The Borders, or any other areas that we cover, also I suspect this trend can be seen across Britain as a whole. Let me know if you think otherwise.

So how much biomass fuel are our urban forests producing? And what does that equate to in terms of energy? Well again figures are hard to come by,  TD Tree & land Services have removed around 500 tons of useable biomass from the Edinburgh area over the last 12 months. If we use that as a starting point and  imagine that averaged out each of the tree surgeon companies operating in the Edinburgh area had removed 200 tons of useable biomass then we have 6000 tons in total. If this was broken down into 2000 tons of logs and 4000 tons of chip the monetary value would be around £500,000 once processed, not bad! That would yield around 22.2 Gigawatts of heat energy, which is a lot when you consider that Doc Brown’s DeLorean only needed 1.21GW to send it back to the future…. Actually it would probably only heat the entire city of Edinburgh for a couple of weeks but then a couple of weeks is better than nothing and would still be a 4-5% saving on total energy used. If every city did the same then we would have gone a significant distance towards our carbon reduction targets.

The only question remaining is are we putting all that green energy to use? I’m not sure that we are, while most tree surgeons sell their timber as firewood most wood chip goes to composting, ending up being used as mulch on paths and allotments. In environmental terms this is a waste. It would be good to see more of this being used as a fuel source, it has its problems as such though, it tends to be of differing quality, in terms of size and consistency, as well as moisture content. None of these problems are insurmountable though, chip can either be screened or burned in boilers that can handle the uneven particle size, and chip can also be dried to a moisture content that allows more efficient burning. Until we tackle these problems though we will still end up wasting a large amount of the green energy that our urban forests produce, boiler manufacturers need to come up with boilers that can handle stringy leafy chip  Furthermore if someone built one that used spare heat to dry the chip in its chip store as it made its way through to the burner then they would undoubtedly be a top seller, in most cities tree surgeons will dump chip for free as they are keen to get rid of it, someone with a boiler that was capable of taking fresh chip and drying it before burning would likely have a free source of fuel….

I am pleased to say that thanks to Fourth Resource Management, who handle a large quantity of the wood chip produced in Edinburgh, chip from tree surgeons in Edinburgh is being supplied to power plants to provide green energy to the national grid. This can only be a good thing, and as we head into the future more projects like this will only help the drive away from fossil fuels.